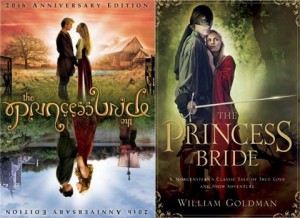 I haven’t written an article in this series since the fall of 2008.Â  But I’ve decided that it’s time to write the next entry in the series.Â  This time, about The Princess Bride.

This is one of my all-time favorite movies.Â  It is one of the few favorite films that I list off of the top of my head when asked.Â  Most people assume that it is based on a book, and that the book is what the grandfather reads in the film.Â  A little bit of research and you’ll find that those people are only half right.Â  It is based on a book of the same name, but the author, S. Morgenstern, doesn’t really exist.Â  William Goldman wrote the book, which was published in 1973.

The book is formatted in much the same way as the film.Â  It starts in a fictional reality that you find yourself almost believing, and gets into the history of S. Morgenstern’s Princess Bride, and how the book is actually much much larger than one remembers, because the only parts that have been read are “the good parts” which explains how the grandfather in the film is able to complete the book reading in what seems to be one day.

This is one case where the book and the film are on the same level.Â  Neither is better than the other.Â  I can say that, without a doubt, the book did not have anything that was truly necessary for the film that was missing.Â  The script for the film was written by the author of the book at the same time that he wrote the book.Â  It only took about fourteen years for the film to finally be produced.

The film captures the essence of the book, and seems to act as the good parts of the book, omitting things that would have been either impossible or expensive to film.Â  Instead, it is a focused storyline that moves through the storyline, acting as a great storytelling movie that takes us on an adventure that is quite unique.Â  Taking us on an adventure through a story within a story, and managing to captivate us with both.

The book does have a lot of things that the movie doesn’t, such as more in-depth back stories for all of the characters.Â  While it was interesting to read about the things the movie shows us in pieces, none of it was really all that necessary.Â  The movie does a good job of giving each of the characters pretty good histories in very unique ways.Â  The book also has some very unusual sequences about the politics of the countries in the story, that are very unnecessary to it all.

Though one thing the book has that I found very interesting, though, was a new chapter added to the book for one of the anniversary editions.Â  The first chapter of the sequel to The Princess Bride.Â  Called Buttercup’s Baby, it details what happened immediately after the four heroes left on horseback.Â  Where did they go?Â  What happened next?Â  Well, it details all of that, leading to a cliffhanger ending, and I really want to know what happens next.

The simple fact that the author of the book is the same person that wrote the screenplay means that he made all of the decisions on the changes from book to screen.Â  It also shows that changes from book to screen are both necessary and perfectly fine, when either the story is streamlined or enhanced by a performance of the material.Â  It shows that a movie doesn’t ever have to be a word for word translation to still work.Â  If an author of a book, and its’ screenplay, can make changes to the story, then it should be possible with any book, when translated to the screen.

The same situation happened with Louis Sachar’s Holes.Â  There were some significant changes there, too, including the weight of the main character, Stanley Yelnats, being different from book to screen.

Anyway, I’ll continue to explore this concept in future editions, comparing book to screen, with the film either matching the book or beating it.

This is probably the first in a series of articles on the times that a movie has either been as good as the book, acted as a great complement to the book, or bested the […]