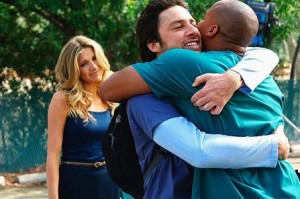 I just watched the last episode of the season of Scrubs.  I think that was the perfect way to end the series. The episode was full of laughs, tears and a range of emotion, and in the typical fashion of the show, a lesson to learn. You’d think that after eight seasons they’d run out of lessons to teach, but it seems they were saving one for the end of the show as we know it.

I started watching the show with the first episode of season 4. I had seen a few commercials for it, and it looked like something that at its’ worst would make me laugh a little bit. It became one of my favorite shows from the first few minutes of that episode. I started watching it weekly to see if it was consistent. I also started scouring the internet frantically looking for episodes from the first three seasons. It wasn’t available on DVD yet so, yes, I downloaded them. I now own every season on DVD and plan on purchasing season eight when it is available. I’ve been a big fan ever since.

The question remains: will there be a season nine? After a finale like that, if it ends there, I’m satisfied with it. If it does go on, I do hope the writing team sticks with it, as they seem to be at the top of their game again. The seventh season, while a good season (there wasn’t a bad one, really), didn’t have the memorable episodes save for a few. The new interns are excellent, and if season nine does happen, I look forward to sharing in their adventures.

I would go on, but it’s nearly 2:30am and I need some sleep, so I’ll end this with the final words of the episode: Good night. 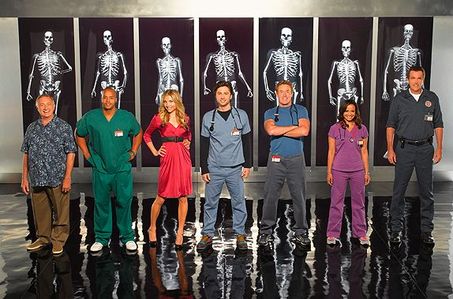 “Endings are never easy. I always build them up so much in my head, they can’t possibly live up to my expectations, and I just end up disappointed. I’m not even sure why it matters to me so much how things end here. I guess it’s because that we all want to believe that what we do is very important: that people hang on to our every word, that people care what we think. The truth is, you should consider yourself lucky if you even occasionally get to make someone, anyone, feel a little better. After that, it’s all about the people you let into your life.” -J.D.

“My Finale” made me happy. And it made me sad. Seems about right for the ending of a show that so often expertly balanced comedy and tragedy.

For that matter, “My Finale” did a nice job of being both a definitive ending for J.D. (and for Kelso) and just another day in the life for Cox, Turk, Carla and all the others are staying behind. Whether or not the show continues with a reconfigured cast, I like endings that acknowledge that the characters’ lives continue, even though we won’t get to see any of it.

Written and directed, as it should have been, by Bill Lawrence, “My Finale” hit all the necessary points. It gave us all those flashbacks to J.D. in the pilot, to show how far he’s come — and, for that matter, to show how much the characters around him grew and changed with him. (He humanized Cox, and Cox in turn humanized Kelso, more than either man would like to admit.) It featured a bunch of “Scrubs” Greatest Hits, whether it was Cox reciting the final lines of his greatest rant ever, or Turk giving J.D. his biggest and bestÃ‚ “EEEEEAGLE!”Ã‚ It gave us a payoff to the debate about whether J.D. put a penny in the door — and in doing so, brilliantly and permanently changed my impression of the J.D./Janitor rivalry — and it gave us The Janitor’s real name (Glenn Matthews), then immediately pulled the rug out from under the idea by having someone else walk by and call him “Tony.” (And in so doing, it gave fans everywhere license to keep calling the guy whatever they want. He could really be Glenn, or Tony, or Jan I. Tor, or Neil Flynn, or Zanzibar Buck-Buck McFate. It’s all up to you to decide.)

It gave us that sweet J.D./Carla moment where they thought back on how he used to be “Bambi.” It gave us one Turk/J.D. hug after another (along with the guys’ delight at Carla and Elliot’s mock girl-on-girl hug). It gave us a reminder that J.D. and Jordan slept together once upon a time, and it gave us that wonderful line-up of guest stars and minor characters from over the years, including, but not limited to: J.D.’s brother Dan, The Todd, Tasty Coma Wife, crazy Jill, Laverne, Rex, Ted’s band, Dr. Wen, Colin Hay (who did appear on camera a few times), Lady, Keith Dudemeister, Dr. Mickhead, both the character Randall Winston (the little person custodian) and the producer Randall Winston (as the hook-handed security guard), the studly gynecologist, Mrs. Tanner (repeating the advice she gave J.D. at the end of “My Old Lady”), Colonel Doctor, Snoop Dogg Attending, and Hooch (now in a straightjacket, because Hooch is crazy!).

It was every bit the trip down memory lane I would have liked, without actually closing down the hospital or killing off anybody else major.

And then the show that always used music so brilliantly did it three more times at the end, first with Peter Gabriel’s “The Book of Love” playing over J.D.’s imagined home movies of life after Sacred Heart (and, as with Janitor’s name, it was presented in a way that allowed the audience to accept it as what would really happen, or not), followed by the guitar part of Lazlo Bane’s “Superman” over J.D. driving out of the parking lot one last time, followed with the closing credits behind-the-scenes reel being accompanied by The Blanks singing their own version of “Superman.”

Nice. Very, very nice. And that’s not even mentioning maybe the best, most serio-comic moment in the whole hour: Cox delivering a heartfelt speech to Sunny about how much J.D. really means to him, with J.D. sneaking up behind him halfway through. (Like The Janitor, he staged a little play to get what he wanted, and I loved Sunny’s horror at realizing the long-term implications of her involvement in it.)

I could go on for a while about the other moments in the finale (including Christa Millers’ hilarious delivery of “I want to touch it but I don’t!” as Jordan studied the blotch on Ted’s skin), but “My Finale” deliberately put me in such a nostalgic mood that what I’d really like to do is let you waste some of your evening the same way I wasted much of this afternoon: by looking back at some classic moments from the eight-season run of this wonderful series. The YouTube links below are by no means complete, both for time and because not everything I wanted was posted (copyright issues prevent the “I Will Follow You Into the Dark” sequence from “My Last Words” from playing with sound, for instance), but here’s some quality ones, and feel free to post more of your own in the comments:

– “Waiting For My Real Life to Begin” from “My Philosophy”

– The best of Ted’s band

– Dr. Cox gets payback on JD

– The complete saga of “Dr. Acula”

And before I go, I want to post an excerpt from a column I wrote at the start of the show’s last season on NBC, when it looked like the show was limping to the finish line, instead of this wonderful, unexpected victory lap on ABC:

At a time when the traditional sitcom was beginning its death rattle, “Scrubs” proved that a little imagination and a lot of gusto could create a new kind of comedy that was funny without a laugh track. In the brilliant John C. McGinley’s Dr. Cox (a kind of proto-House — and, frankly, a more interesting dramatic character than House, though Hugh Laurie gets better jokes these days) and Ken Jennings’ venomous chief of medicine Dr. Kelso, the show gave us two hilarious updates to the old TV cliche of the crusty but benign boss.Before “The O.C.” and “Grey’s Anatomy” made it de riguer to close episodes with montages scored to cool indie rock songs, “Scrubs” was regularly making beautiful use of off-the-beaten-path music. The show also had a knack for doing its own ingenious musical numbers without making a big deal about it, like suicidal hospital lawyer Ted (Sam Lloyd) commenting on episodes with the help of his a cappella “band,” or Turk celebrating the chance to remove J.D.’s appendix with a funky song and dance called “I Get To Cut You Open.”

Because it debuted in the waning days of NBC’s comedy empire (even briefly airing after “Friends,” but so irregularly that it didn’t help build an audience), overlapped with several other laugh track-free comedies that got bigger ratings and/or more award show love (“Malcolm in the Middle,” “Arrested Development”), and comes to the end of its run with so many other shows having cribbed from it, “Scrubs” never got and probably never will get the credit it deserves. But at its best, it was as funny as any other comedy on television, as moving as any drama.

And with that, I bid farewell to “Scrubs” — at least to this version of it. Whether or not the show comes back next year, regardless of what it’s called, who’s in it, and whether it’s any good at all, we’ll always have these eight seasons, and they’ll always make me smile.

What did everybody else think?

Here’s the latest on the next season of Scrubs. As more and more is revealed I am more or less hopeful for the future of the show. They said before that, like Frasier was a spin-off of […]