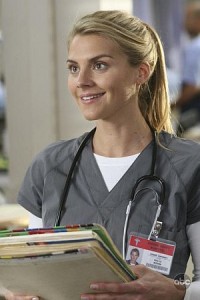 One of the interns from Season 8 is, in fact, returning to become a regular cast member on the show for the next season of Scrubs (or the first season of the spin-off). Eliza Coupe will return to her role of Denise (aka ‘Jo’) for Season 9.

Scrubs creator Bill Lawrence comments, “I really like Eliza. I think she’s a really interesting actress and we didn’t give her a full character [last season]. I think she’s hyper-talented.”

We finally know more about what they’re going to be doing to change the format of Scrubs for the ninth season. I have to admit being slightly worried about the shift in the show, but […]

I was expecting this to happen, and am very hopeful for a brilliant start to a new chapter in the world of Scrubs.  The chapter featuring Dr. John Dorian’s first 8 years, from intern to […]

I just watched the last episode of the season of Scrubs.  I think that was the perfect way to end the series. The episode was full of laughs, tears and a range of emotion, and […]