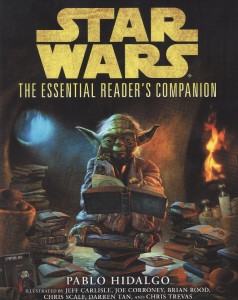 One of the big questions about the new Star Wars trilogy is this: what does this mean for all of the books in the Expanded Universe that take place after the original trilogy?

First, some background on the Expanded Universe

Since 1991’s release of Heir to the Empire, new Star Wars stories have been released pretty consistently.Â  Books that cover, so far, about 44 years of adventures after the Battle of Yavin (which is the battle that takes place in A New Hope).Â  This territory includes many adventures with the primary cast from the trilogy, as well as their children, the Empire, and changes to the known universe.Â  A lot of great adventures that land all over the timeline.Â  If a character dies in a particular book, any book that happens later on cannot have that character suddenly living as if nothing has happened.Â  What people that don’t know, or understand, that haven’t looked into the Expanded Universe, is that it all happens on the same timeline. This means that a book that happens on the timeline between two previously written books can’t change things so much that the following story doesn’t make sense, so that there’s a logical progression.

Now, with new Star Wars sequels coming to film, how does that effect the Expanded Universe?

Well, for the most part, at this time, we don’t really know.Â  One thing we do know is that the new trilogy, Episodes 7, 8 and 9, all happen after Return of the Jedi.Â  What we don’t know is how much later they happen, and what the films will say happened between the end of Episode 6 and the start of Episode 7.Â  Each of these things, as well as revelations over the course of the three films, could have a sweeping effect that forever alters the state of the Expanded Universe.

This is what Pablo Hidalgo wrote about the situation in the recently released book, Star Wars: The Essential Reader’s Companion:

Common questions are: How “real” are these stories?Â  Do they count?Â  Did they really happen?

The most definitive canon of the Star Wars universe is encompassed by the feature films and television productions in which George Lucas is directly involved.Â  The movies and the Clone Wars television series are what he and his handpicked writers reference when adding cinematic adventures to theÂ Star Wars oeuvre.

But Lucas allows for an Expanded Universe that exists parallel to the one he directly oversees.Â  In many cases, the stewards of the Expanded Universe – editors within the licensing division of Lucasfilm Ltd. who work with authors and publishers – will ask for his input or blessing on projects.Â  Though these stories may get his stamp of approval, they don’t enter his canon unless they are depicted cinematically in one of his projects.

That said, unless something occurs in a canon project to directly contradict a published source, it can reliably be said to have occurred.Â  Extensive records track the growth of the Expanded Universe, cataloging planets, characters, technology, and events, to allow for a sprawling, believable continuity connecting the published works of the Star Wars universe.Â  It’s not perfect – when errors occur, the Companion does sometimes call them out.Â  This is not to diminish these tales in any way, but rather to illustrate that the Star Wars Expanded Universe is a living document that grows…

The films and TV shows that come next aren’t going to be (necessarily) based on any of the books that have been written, nor will they be informed by those stories.

For all intents and purposes, the Star Wars film that J.J. Abrams directs first, should he direct any more, will do with the Star Wars Expanded Universe, what his Star Trek did with the entire timeline there.Â  This time it won’t be a sweeping reboot that plants us in an alternate timeline, in which all of the prior continuity is wiped clean.Â  This time, it’s the Expanded Universe that is becoming (officially) the alternate timeline.

Personally, I love many of the books that I’ve read in the Expanded Universe, and wish that they’d eventually consider bringing a few of those to the big screen.Â  However, it all depends on when the new Star Wars trilogy takes place.Â  What it says happened to some of the characters since the original trilogy, as well as the existence of their heirs, if any, may not leave room for any of, the Expanded Universe stories to happen.

All we can do now is wait and see what the new Star Wars trilogy brings, and maybe read some Star Wars books set on the alternate timeline.

Iron Man 2 – Another Marvel Comics Movie better than the First

Like many of you, I saw Iron Man 2 this weekend.Â  It was actually the midnight screening on the local (real) IMAX at Celebration Cinema.Â  I had a great time with this movie, and felt […]