One of my favorite comic book series was Young Justice.Â  The team consisted primarily of Superboy, Robin and Impulse (who is now called Kid Flash in the comic world).Â  Other original members included Wonder Girl, Arrowette and Secret.Â  The team’s guardian was Red Tornado.Â  The membership of the team changed as time went on.Â  Characters code-names changed, members came and went, and the series came to an end in 2003 as many of the characters joined Teen Titans.

This fall on Cartoon Network, the series that I never thought would happen is coming.Â  This is likely thanks to there already being a Teen Titans cartoon, so they don’t cause confusion by having another one.

In this version of the story, however, the team is a bit different.Â  On the team are Superboy, Robin, Kid Flash (though I like the name Impulse better), Artemis (who appears to be an amalgam of Arrowette and Wonder Girl for some reason), Aqualad and Miss Martian.

I’m still looking forward to it, though, as it should be a fun show if it has the sense of humor of the comic.Â  It was always really funny.

YOUNG JUSTICE is an all-new series produced by Warner Bros. Animation and based upon the characters from DC Comics. In YOUNG JUSTICE, being a teenager means proving yourself over and over â€“ to peers, parents, teachers, mentors and, ultimately, to yourself. But what if youâ€™re not just a normal teenager? What if youâ€™re a teenage super hero? How much harder will it be to prove yourself in a world of super powers, super villains and super secrets? Are you ready to come of age in such a world? Are you ready for life or death rites of passage? Are you ready to join the ranks of the great heroes and prove youâ€™re worthy of the Justice League? The members of Young Justiceâ€”Robin, Aqualad, Kid Flash, Superboy, Miss Martian and Artemisâ€”are about to find out.

This all-new series is produced by Warner Bros. Animation and based upon characters from DC Comics. Sam Register (Teen Titans, Ben 10, Batman: The Brave and the Bold) is the executive producer. Brandon Vietti (Batman: Under the Red Hood, Superman Doomsday, The Batman) and Greg Weisman (Gargoyles, The Spectacular Spider-Man, W.I.T.C.H.) are the producers. 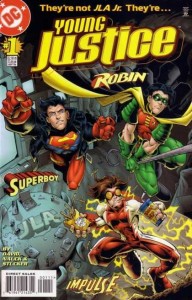 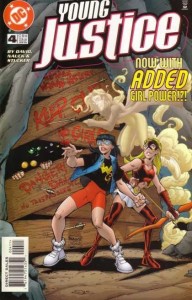 The series premieres on Cartoon Network in the Fall of 2010.

It’s no secret that, beginning in September with the end of Flashpoint, DC Comics is going to be starting a total of 52 comics over at #1 including many very iconic comics.Â  Here, I’m going […]

I just saw a sketch on Conan that featured a clip from the upcoming series Young Justice featuring Conan’s superhero character The Flaming C.Â  Suddenly I saw a lot of traffic from search engines and […]

These are the team comics that I’m the most interested in, which haven’t been listed in any of the other articles I wrote prior to this.Â  There are two Justice League teams, a very Young […]