Anybody that knows me at all knows that I’m a pretty big fan of video games. I have played video games since the old Atari and NES. This gives me a perspective on games that I don’t see very often.

Today was Nintendo’s Press Conference at E3. The announcements that were made were not at all bad, though presentation could have been better, the products speak for themselves. I’m just upset about the omission of three properties that I’d love to see make a comeback on Wii.

Nintendo Channel on Wii has also been updated to include trailers for the games they debuted at E3.

We’ll start with the surprises. All three are games that I now plan to get, and have added to my radar to acquire as soon as they are available.

Surprises that I now want to have:

I love the first New Super Mario Bros. on DS, and with that game being a top seller, expected to hear about New Super Mario Bros. 2 for DS at this year’s E3. What I did not expect was to see another entry in the series appear on the Wii. And it’s four players – SIMULTANEOUSLY! Not only that, but it is scheduled to come out by the end of this year, as they said Holiday 2009.

Seeing as the rumored new Mario game had just been announced, I didn’t see this announcement coming, and was slightly disappointed, even though I didn’t really expect it to be announced. And then it happened:

You’ve got to be kidding me! This has me extremely excited. When I finished Super Mario Galaxy, I already wanted more adventure in the universe that Nintendo created with that game. Even with the pain and frustration that sometimes came with the challenges presented by the game, I wanted more. And more is exactly what we’re getting. This time, Yoshi is invited along on the adventure, as you can ride him around. It’s going to bring new gameplay elements into the fun adventure that I gave a 10 out of 10. I look forward to playing through the first adventure again, as well as the all new adventure, coming in 2010.

I had heard rumor of the Metroid series returning to the style of play that it began with, with the first person perspective going away. This is that game. With Metroid Prime Trilogy being released later this year on Wii, you could say that is Retro Studios final Metroid game. What they’re working on now is a mystery at this point.

The trailer for Metroid: Other M starts out with the identity of the game being a mystery, until finally Zero Suit Samus appears and then puts on the suit. Not to mention the fact that she talks as well. This game looks incredible, and it, too, is due out in 2010.

Other games that they announced that I want

This looks better than when they first announced it. With a really wide variety of mini-games to play, including Table Tennis, a Swordplay game, Archery, More golf, Basketball, Water Skiing, Kayaking, Frisbee throwing, 3-point contests and more. I was very surprised by the number of different games available to play. 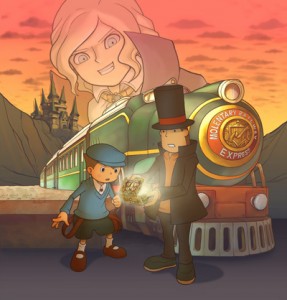 Professor Layton and the Diabolical Box

This is for the DS, and it’s the second game in the Professor Layton series. I’ve been having a great time playing the first game in the series, and look forward to this one as well. It’s utterly addictive and fun. This wasn’t announced during the press conference, but looks great.

I hear this game comes out as soon as August of this year.

Properties that are mysteriously missing

Kid Icarus – Pit appears in Super Smash Bros. Brawl, and is a terrific character. Let’s see him return in a new franchise that becomes classic!

Zelda – Twilight Princess doesn’t really count, Nintendo. Let’s see a new Zelda made for the Wii from the start! And let’s see it come out on the Wii and not Wii 2.

All in all, though, a great E3 for Nintendo. Microsoft has enthralled the world with it’s controller free motion device, but to play a game like Super Mario Galaxy, no amount of hands free control will give you the added benefit of having a control stick and some buttons. People like to have tactile feedback.

As for Sony, the one game that they have a trailer for that I wouldn’t mind playing is one that is exclusive to the PS3. Sad. It’s called The Last Guardian.

But then Sony, again, tries to claim to be the first with technology that Nintendo invented. Really, Sony? Motion controller? In 2010?  With 1 to 1 controls? Sounds a lot like you’ve been in a cave somewhere, while Nintendo announced Wii Motion Plus. Seriously. Get with the program.

There was one other Nintendo announcement that I just wanted to comment on: Wii Vitality Sensor.

The Wii Vitality Sensor could add more depth to games like Resident Evil and Call of Duty. Imagine a game where you do a whole bunch of stuff, and then you get caught and have to use it when doing a lie detector test. There are many many possibilities for this that people aren’t really thinking about. Thinking outside of the box with this device is very important.

Yesterday I wrote a bit about how I was disappointed with the lack of an announcement for three properties. I had completely forgotten about Pikmin 3, but was reminded about it as Shigeru Miyamoto expressed […]