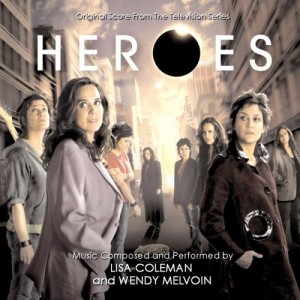 Since the first episode of Heroes, I have wanted to own a recording of the score by Wendy & Lisa.  Wendy Melvoin and Lisa Coleman have composed a unique experience with the score, that sets Heroes apart from traditional superhero soundtracks. The pilot episode was first played at the San Diego Comic Con with a temporary score taken from Batman Begins. That music became the inspiration for the melodies and the tempo that was produced for the shows premiere that fall.

), but it’s composed of songs that the writing staff listened to while writing the scripts for the show. It also included a little bit of the score, but all in all I only was able to handle it a couple of listens. It wasn’t something that I enjoyed, as I didn’t really know many of the songs, and if I did, I wasn’t a fan of the artist, for the most part.

Then I got an e-mail from La-La Land Records. I had ordered a couple of soundtracks from them recently: Superman: Doomsday and Batman: The Animated Series. The e-mail detailed the Heroes Score that was releasing the next day at Noon. I had checked their website, and eventually e-mailed them to find that out when I couldn’t find a reference for it on their website. It turns out that the release date and time was only listed in one corner of the e-mail, and it was pretty small. I was focused on the content of the e-mail. Perhaps that is something that they’ll fix in the future.

Anyway, I got to the website the next day, and was able to order it fast enough to get the autographed edition of the score. Sweet! It’s been in my car ever since, and there are very few tracks that I would even consider skipping. It’s a brilliant soundtrack and one well worth owning for any fan of Heroes.

Get the Heroes Score!

Get the Heroes Score!

Beauty and the Beast Soundtrack Review

Every once in a while we like to try new things in order to see what you, the reader, enjoys. Here is the first “toonbox,” which will consist of soundtracks from animated films. Enjoy! In […]