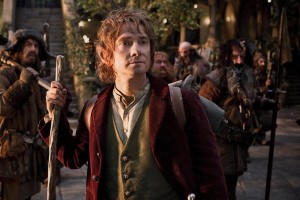 Within the past couple of days, people have been slamming The Hobbit film.Â  Not for the content, though, they seem to love that.Â  They’ve been talking about the speed at which the film is displayed: 48 FPS.Â  Until now, that hasn’t been possible to display at a movie theater.Â  Until now, and for the last 90 years, all movies have been projected at a mere 24 frames per second.

It’s a leap forward in technology.

Something weird is happening, though.Â  The negative reaction to the 48 FPS is because it is “too realistic.”Â  But since when has that been a problem for people?Â  People to want their video game graphics to be as realistic as possible.Â  I’m one that doesn’t care what the game looks like, as long as it’s fun to play.Â  I love a beautiful looking video game, but I think that the SNES and up is fine as far as graphics quality.Â  But more often than not, people talk about how great the graphics look, and that’s what they’re looking for in a video game.Â  People also buy the latest and greatest in HD TVs, Blu-ray Discs, and even Apple is touting the graphical display capabilities of the new iPad (3rd Generation).

And when our movies look better, we’re suddenly against it?

“Indeed, the footage was vivid, with grass blades, facial lines and soaring mountains appearing luminous and pronounced. The actors looked almost touchable, as if they were performing live on stage.” (CBS)

Now, an article in Variety sheds a very positive light on it:

It goes on from there, but here’s another highlight:

First, HFR solves a couple of problems, especially for 3D. At 24 fps, when the camera pans or an object moves quickly across the screen, the image smears with “judder” or “strobing,” which is annoying in 2D but infuriating in 3D. Higher frame rates reduce or banish strobing.

Higher frame rates also let projection get brighter. With brighter light comes more flicker. If the frame rate goes up, flicker goes down, so brightness can go up, too.

In fact, movies would flicker at even today’s standard light levels, but each frame is flashed two or three times, depending on the projector, to prevent flicker. So in that sense, projectors have been delivering a sort of ersatz version of HFR (48 or 72 fps) all along.

But frame rates do change the look of the picture radically. While movies were at 24, standard-def TV was 30 frames per second. The difference between 24 and 30 may not sound like a lot, but it is.

During the High Frame Rates panel at the recent SMPTE Summit on Cinema, Northrop Grumman Aerospace’s Stephen Long took to a microphone to discuss research his company had done on frame rates a decade ago.

“We learned very quickly that the ‘film look’ was all about 24 (fps), it’s not about film,” Long said. “As soon as we rotated the variable speed to 30 it looked like television. When we cranked it up above 50, it started to look different than anything.”

“Wow, something changed,” he said. “It looked better. That’s not a scientific description. It changed the perception, the sense of reality.”

Now, you might be looking at this and thinking that it’s weird that The Hobbit is shooting in 48 FPS and not 60 FPS, then.Â  There’s actually a good reason for that, and it’s not just something Peter Jackson said.Â  He did say that the leap between 24 and 48 was incredible but 48 to 60 FPS wasn’t that great a difference.Â  However, it seems that technology also had something to do with that decision.

Asked why “The Hobbit” is being made at 48 instead of 60, which seems to be “better,” Phil Oatley, head of technology for Park Road Post, said “Because we can’t show it (60) yet. … It came down to how can we get a high frame rate film made by the end of the year?”

That’s why I don’t think 48 fps is going to be the new standard: It’s an only an interim step.

HDTVs are already capable of 60 fps or more, and some broadcasts use a version of 60 fps. In fact, TV is the elephant in the room in this conversation, because it’s pushing the entertainment world toward 60 fps.

Cool, so when the Hobbit comes out on Blu-ray, I’ll be able to watch it as Peter Jackson intended on my TV at home… in 48 FPS video.Â  That is a very good thing.

People want better graphics in their video games, they want HD TVs and they want Blu-ray Discs and High Def streaming, and they want HD iPads, and even Apple markets it as more magical and more incredible… and yet our movies can’t ever get better?

On the Etiquette of Movie Spoilers

I just read a blog on Cape Town Community called Please Don’t Spoil My Movies! which I found to be something that I agreed with wholly.Â  When it comes to movies that I want to […]

The Hobbit to be Two Films

After much talk about the Hobbit film being shot as one film, with a second film to bridge The Hobbit to The Lord of the Rings, a final decision has been made. Peter Jackson and […]

Lego The Lord of the Rings is coming! (Lego The Hobbit, too!)

Looks like the article I wrote a while ago about the potential for a Lego Lord of the Rings was right on the money.Â  Back in February of 2010, I wrote that the LEGO company […]