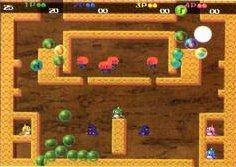 The first video game that I ever had was Bubble Bobble for the NES. It was and is a very addictive game with a couple of small dragons that attack their enemies by capturing them in bubbles that they spit from their mouths. I just learned about a new game coming soon to WiiWare on Wii.

Four-player Bubble Bobble action. It’s going to contain the 100 old stages from the original NES Bubble Bobble (now available on the Wii Virtual Console), though the graphics have been enhanced. In addition, there will be 100 new stages. That’s 200 total stages, with harder versions of all of them, which I find to be incredibly frightening, as the game seemed almost sadistic at times.

Bubble Bobble Wii will be available for 800 Wii Points ($8)

Two packs of 50 stages will also be released at 200 Wii Points ($2) a each, available as Downloadable Content sold separately.

With four player action, Bub and Bob will be joined by newcomers Bib and Bab. There’s no word on the storyline at this point (the original being a very weak story as it is just in place to reward players for completing the game properly).

In the original, if I remember correctly, the two dinosaurs, Bub and Bob were actually humans that were turned into the dinosaurs, and their goal was to defeat the final boss to free their girlfriends and become human again.

This then leads into the sequel, called Rainbow Islands: The Story of Bubble Bobble 2. This confused me greatly when I was younger, as the game play mechanics were pretty different. Instead of clearing all the enemies in the limited time you are given, you had to get to end of the stage, by building paths by creating rainbows that you could walk on, and working your way up through the stage to the top before the time was up.

Adding to that confusion was the later release of Bubble Bobble Part 2. I never played it though, as the artwork on the box somehow made the game seem too different to me. It was also strange that they’d release a game that was essentially the sequel, and another later another game with the same number. Which one is it, though? According to Wikipedia, Bubble Bobble Part 2 was referred to by the end of Rainbow Islands as “The Story of Bubble Bobble 3.”

Anyway, I am pretty excited about the new game, though it’ll be out in Japan at some point this year, and no release date has been announced.

Ubisoft has announced a Teenage Mutant Ninja Turtles game for Wii, to be released later this year. The creative team developing it is called Game Arts, who had a hand in preliminary development on Super […]

I had never heard of Klonoa before this late last year. When I did hear about it, I wasn’t all that interested in it. But since reading about the game-play mechanics, consider me interested in […]